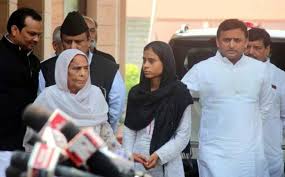 Amid outcry over lynching of a man in Dadri over rumours of consuming beef, Uttar Pradesh Chief Minister Akhilesh Yadav on Tuesday alleged that some forces doing politics on communal lines were conspiring to defame his government and stall development in the state.

“Some forces are conspiring to spread communalism and we have to remain alert from them,” Akhilesh said while addressing representatives of Medium, Small and Micro Enterprises (MSME).

“Today when the world is marching ahead on the path of progress, some forces doing politics on communal lines want to take the country and the state towards backwardness,” he said.

He alleged that these forces want to defame the state government.
“They are raising issues and debates which harm all sections of the society,” he said.

The CM said that conspiracies of such forces need to be foiled to take the state ahead on the path of development.

He said that the people of the state have lived together with brotherhood and harmony since ages.

Akhilesh expressed confidence that peace loving people of the state would not allow forces creating differences to succeed in their designs.

His remarks come in the backdrop of the Dari killing a week ago which has sparked outrage in the country. 50-year-old Iqlakh was dragged out of his home by a 200-strong mob and beaten to death after a public announcement from the local temple that the family had slaughtered a calf and eaten its meat in Bishada village.