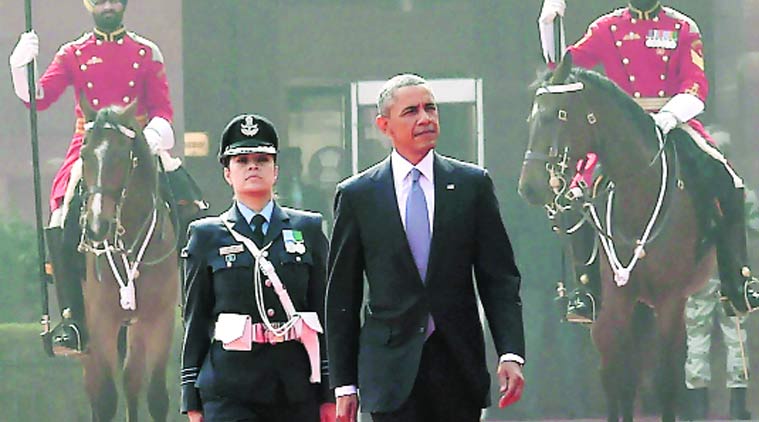 This is big moment, Wing Commander Puja Thakur told herself, musn’t mess up

As Wing Commander Puja Thakur marched up to the most powerful man on the planet on Sunday morning, she was acutely aware that the eyes of the world were fixed on her — and that she must not put a step wrong.

“When I walked up to him and asked him to come and inspect the parade, he had a slight smile, a pleasing expression… he looked assured… And I kept telling myself, ‘this is the big moment, don’t mess up’,” the officer who commanded the guard of honour for President Barack Obama at Rashtrapati Bhavan told The Indian Express.

It was 3 pm — almost three hours after she was seen doing a crisp march behind the US President — and Wing Commander Thakur had only just got a chance to grab a quick lunch.

And while the historic moment at whose centre she was watched by millions of people on television, it was also a private, personal moment for the education officer of the Indian Air Force. “After the ceremony was over, I took five seconds to call my family and asked them: Did you see that?”

Her family had indeed watched her with “pride”, Thakur said — from the time she took her position to wait for the 49-odd black-and-white vehicle cavalcade of the US President to the time she marched up to him and asked him to inspect the parade.

She spoke in Hindi, she said, the official language of instructions in a parade — addressing President Obama as “Shrimaan”.

“I waited with the contingent… the vehicles were yet to arrive. The wait was long… It gave me time to think, to look around, and I thought, ‘This is a big moment… you should not mess up… It is a high standard parade of the defence forces and you have to make it impressive.’ I kept telling myself this even as I marched up to him,” said the officer.

This was the first time that a woman officer had commanded the guard of honour, Thakur said, and it was just a few days ago that she was told she was the chosen one. “We practised for a few days. I don’t know for exactly how many hours, but it took some time to get used to the word of command. After I was ready, there was the dress rehearsal,” she said.

A 2000-batch officer of the Air Force Academy, Hyderabad, Thakur, who is now posted at the publicity directorate DISHA at the Air HQ, was commissioned into the education wing of the IAF in 2001 after a year’s training.

Was she chosen to project woman power, which remains an unsaid central theme of the R-Day parade? “I was chosen not because I am a woman, but because I represent the smartly continued…