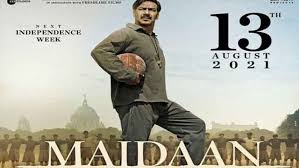 Maidaan , featuring actor Ajay Devgn in the lead, will now hit the theatres on August 13 next year .

Based on the golden years of Indian football, “Maidaan”, was initially scheduled to release on November 27, but earlier this year the makers pushed the film to December 11.

Devgn took to Twitter on Saturday to announce the new release date of the movie.

“2021 Independence week. An untold story that will make every Indian proud. 13th August mark the date. #Maidaan2021 (sic),” he wrote alongside the poster of the film.

Owing to the ongoing coronavirus pandemic, the shoot of the film has got affected and it is likely to begin post monsoon.

In “Maidaan”, the 51-year-old actor will portray the role of Syed Abdul Rahim, who served as a coach and manager of Indian football team from 1950 until his death in 1963.

The movie is directed by Amit Ravinder Nath Sharma of “Badhaai Ho!” fame, Saiwyn Quadros has written the screenplay, while Ritesh Shah has penned the dialogues.

Kapoor who is also serving as the producer along with Akash Chawla and Arunava Joy Sengupta.

Devgn recently announced his film “Bhuj: The Pride of India” is headed for a direct release on streaming platform Disney+ Hotstar as theatres remain closed due to the pandemic.