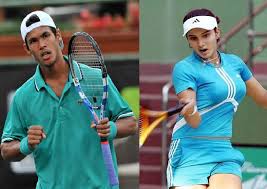 India tennis ace, Sania Mirza finds herself at No 6 as the new WTA doubles chart was released on Monday.

Mirza is now at No 6 in the world in the women’s doubles chart after gaining two places.

The 27-year-old, who turned a professional tennis player in 2003 and overcame a career-threatening wrist injury in between, has achieved her career-best rank of No 5 in the world in July this year.

Ankita was the top-ranked Indian in singles at number 310 and was followed by Prarthana Thombare (364).

Riding on his maiden Challenger title win, Saketh Myneni leapfrogged 168 places to be ranked 283 in the ATP singles chart while Ramkumar Ramanathan achieved a career-best spot of 226 following his semifinal appearance at the just-concluded Indore Open.

Saketh, who was ranked 451 coming into the Indore Open, defeated top seed Aleksandr Nedovysov to win the trophy and earn 80 ranking points on Sunday. The tall and big-serving Saketh was best-ranked 256 in March this year.

Somdev Devvarman continued to be India’s top singles player at 139, a gain of four places. He was followed by Yuki (179), who also climbed four spots up.

Left-handed Jeevan Nedunchezhiyan was the fifth-highest ranked Indian at number 328.