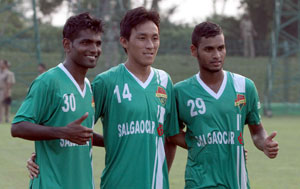 Margao: A keen contest is on the card when two-time champions Salgaocar will lock horns with Bengaluru FC on Thursday in the first semifinal of the 127th Durand Cup at the Raia Panchayat ground.

In the evening, another Goan side Sporting Clube de Goa will meet Pune FC in the second semifinals. The winners will meet in the finals slated on November 8.

Salgaocar FC made their way to the semifinals by topping Group ‘A’ with four points from a win and a draw. Bengaluru FC, on the other hand, also completed their league engagements with a win and a draw in Group ‘C’.

Salgaocar FC, who will be chasing their third Durand Cup, have won the 1999 and 2003 editions. Coach Derrick Pereira has won the Durand Cup twice himself, once with Salgaocar FC in 1999 and as a coach of Mahindra United in 2008.

“It would be fantastic to win this prestigious trophy on home soil in front of our fans. However, we are taking it one game at a time and don’t want to get too far ahead of ourselves. All we need is your full support tomorrow and expect full house to cheer our team”, stated Pereira.

“We have prepared ourselves well and the boys are raring to go,” he added.

In what is sure to be the toughest test this season, Derrick will take heart from the fact that his side has made a near flawless start to the season, being unbeaten in 11 games, add to this the fact that nine different players have found themselves on the scoresheet over the course of 11 games. Ivorian Douhou Pierre has been the standout performer in the Durand Cup having netted thrice already in the tournament and will need to dish out another performance if the greens are to make it to their third Durand Cup final.