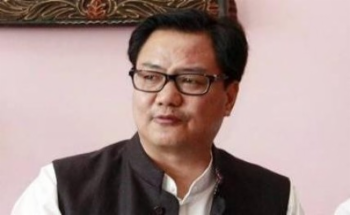 Northeasterners’ Football Tournament In Delhi To Get Better: Rijiju

New Delhi, Dec 1: A football tournament featuring teams representing various communities of northeast India residing in the national capital will be held in a more organised manner from next year, union minister Kiren Rijiju said on Tuesday. “I assure you, the government and the ministry of Development of North Eastern Region (DoNER) will extend full support to this tournament,” Rijiju said while kicking off the Ninth ONGC Northeast Tamchon Football Tournament at the Ambedkar Stadium here. “From next year, we want a formal organisation of this tournament. We want the organisers to concentrate on organising the event and not worry about money,” said the minister of state for home affairs. Rijiju also complimented the organisers, the Tangkhul Naga Society Delhi (TNSD), for unfailingly organising the tournament every year since its inception. Tuesday’s inaugural match was played between Hmar FC and Wung United FC. The 16 participating teams have been divided into groups of four. The other teams in the fray are Barhungkha FC, Sikkim Gambos FC, SSPP, Chiru REM FC, ASUD-TODO FC, Zelianrong FC, Hornbill FC, Garo FC, KSL, Muvanlai, Senapati FC, Chandel FC, MISAD and United Rhino FC. The final match will be played on December 12.