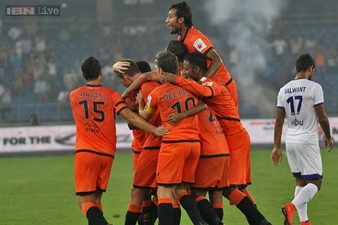 NorthEast ISL: Dynamos seek to build a winning momentum against

New Delhi: A sound thrashing of Chennaiyin FC having boosted their confidence, Delhi Dynamos would look to take forward the momentum when they clash with NorthEast United FC in their Hero Indian Super League fixture here tomorrow.
After two consecutive draws, Delhi notched up their first win of the tournament on October 25 by drubbing the Chennai side 4-1 through three spectacular goals and another from the penalty spot to the huge delight of home fans and coach Harm van Veldhoven.
The Dutch coach talked about his attacking brand of football and goals that would come by before the tournament but he was finding it difficult to answer questions after his side could get just two goals in the first two matches.
Now that his players have tasted their first victory with four goals against a quality side like Chennaiyin, who have come after winning their first two matches, Veldhoven is expected to maintain the tempo tomorrow also.
NorthEast, however, would be a tough team to beat, having won two out of four matches (one match a draw and the other a loss) they have played so far and now at second spot in the league table with seven points. They have also come here on a high after defeating Mumbai City FC 2-0 in their first away match.
Delhi, on five points and fourth in league table, will have another reason to win tomorrow’s match at the Jawaharlal Nehru Stadium as after this they will be on the road for three games before returning home for their November 13 contest against FC Goa.
Veldhoven is likely to stick to the starting lie-up that played against Chennaiyin FC but Brazilian Gustavo Dos Santos, who scored a goal just after coming onto the field in the 89th minute through a solo effort, could be given more playing time.
The midfield trio of Hans Mulder, Bruno Herrero and Steven Dias did a commendable job by controlling the middle of the park for Alessandro Del Piero, Shylo Malswamtluanga and Mads Junker to look for goals.
Former India international Dias found his touch in his first start in the tournament as he supplied the inch-perfect floater for Junker to score a spectacular goal through a diving header.
The Delhi side could also be looking for Del Piero to finally come to the party as the Italian legend is yet to stamp his class in the three matches he has played so far.
NorthEast, on the other hand, are a balanced side with few well-known international and national stars. They have, however, shown that they can go a long way by beating Kerala Blasters and Mumbai City FC and holding FC Goa.
Their attack will once again revolve around former Marseille player Sergio Contreras Pardo of Spain, better known as Koke.
NorthEast defence was impressive against Mumbai City FC with 36-year-old former Spain international Joan Capdevilla marshalling the backline with aplomb to deny their opposition any goal in the first half. The NorthEast side then made a remarkable turnaround in the second half to strike twice and win the match.
It will have to be seen tomorrow how Delhi’s attacking brand of football is able to breach the NorthEast defence.
NorthEast are also expected to have a sizeable chunk of their supporters from among Delhi-based youngsters from the eight states of that region of the country.