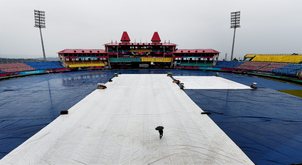 Indian eves lose low-scoring thriller, all but out of WT20

The Indian women’s team paid the price for a dismal batting performance as it lost to England by two wickets in a thrilling group league encounter of the ICC World Twenty20, here today.

Batting first, India crawled their way to 90 for 8 in 20 overs after being put into bat. None of the Indian batswomen save for Harmanpreet Kaur, who scored 26 off 25 ball, tried to force the pace against English bowlers.

In reply, England middle and lower-order survived some nervy moments before getting past the finishing line in 19 overs with two wickets remaining.

With England needing 3 in the penultimate over, skipper Mithali Raj dropped an easy catch of Anya Shrubsole off Veda Krishnamurthy’s delivery and the very next ball was hit past the point fielder much to joy of the England dug-out.

The defeat, India’s second in three matches, also put a spanner on their chances of qualifying for the semi-final as West Indies and England both have two wins in their kitty.

India have one match left against West Indies which they have to win to have any outside chance whatsoever and depend on other favourable results.

Skipper Mithali tried to put up a brave front at the post-match presentation ceremony.

“We are in contention. If we win against West Indies, we will have to depend on other results. We realised it was difficult to score runs. We could have shown more application with the ball to pull us through.”

It was batting that again let India down as they failed to reach the three-figure mark once again after scoring 96 against Pakistan.

In all, only eight boundaries were hit in the 20 overs by the Indian batswomen, which went a long way in them not being able to score 110-115, a total that could have been a challenging one.

Off-spinner Heather Knight (3/15) was the most successful bowler for England while Anya Shrubsole took two for 12.

While chasing, left-arm spinner Ekta Bisht (4/21) did her best to put brakes on the opposition scoring but with too few runs on the board, it was always a game that was slipping out of India’s grasp.

The top scorer for England was opener Tammy Beaumont (20) while Natalie Sciver was the second-best contributor with 19 runs.PTI