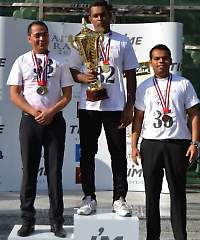 Dinesh Warnakulasuriya, a 28-year old waiter at the Ristretto Café in Golden Tulip Al Thanyah, beat off stiff competition at the first ever TIME Hotels Dubai Waiters Race, which took place on 20 November 2015.

Co-ordinated by Festivities Dubai, the starting point for the inaugural race was the TIME Oak Hotel & Suites in TECOM, with the 35 eager participants racing around a set 1.5-kilometre course.

Runners faced a unique challenge with speed and dexterity the order of the day as they were required to complete the run carrying a loaded tray containing two full glasses and a bottle of water.

Speed, agility and balance were challenged at every turn as they raced as fast as possible along the 1.5-kilometre course, with participating hotels including TIME Hotels, Atana, Golden Tulip, Gloria Hotel, Boutique 7, Auris and First Central.

Commenting on his win, Dinesh Warnakulasuriya said: “it was great to win, we train every day as it is our job to provide good quality service, so it is always fun to put our skills to the test and compete against other peers in the industry.”

The waiters were judged on the amount of water lost, waiter standards (posture, grooming, smile) and timing.

“The Waiters’ Race really brought the community together, overall it was a great success and we are already receiving entries for next year’s event; so we look forward to making it an even bigger, better and more competitive race,” said Mohamed Awadalla, CEO, TIME Hotels.