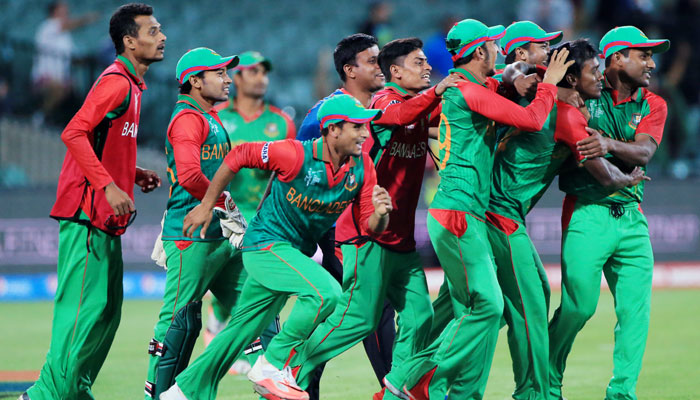 Bangladesh knock England out of World Cup, likely to face India in quarter-finals

Adelaide: Bangladesh rose to the occasion to knock England out of the cricket World Cup with a 15-run win in the Pool A encounter here on Monday, setting up a potential quarter-final clash with defending champions India.
Put into bat, Bangladesh rode on Mahmudullah’s resilient century to post 275 for seven and then put up a spirited bowling show to pack England for 260 runs in 48.3 overs.

Man of the Match Mahmudullah (103) struck his first ODI ton to lift Bangladesh from 99 for four to a respectable score after stitching a crucial 141-run fifth-wicket partnership with Mushfiqur Rahim (89).

England medium pacers James Anderson and Chris Jordan bagged two wickets each.
England started the chase on a decent note even after opener Moeen Ali (19) was run out but the top-order batsmen failed to convert their starts and let go of the advantage in the must-win game.

Bangladesh bowlers, ably led by Robel Hossian (4-53), struck at crucial junctures to put England in trouble.
Ian Bell tried to do the rescue act with a hard-working 63 but Hossian got the opener caught behind in the 27th over.

The middle-order wobbled only to be held by Jos Buttler (65), who fought hard but his seventh ODI fifty was not enough to save England’s fading fortunes.

Chris Woakes (42 not out) battled hard till the end but got little help from the tail as Hossain cleaned up the final two batsman with good seam movement.

Buttler and Woakes, with their seventh-wicket 75-run partnership, looked like taking the Three Lions to a win at one stage, but Bangladesh were just unstoppable on a day that belonged to them.

Mahmudullah bettered Bangladesh’s previous individual best of 95 made by Tamim Iqbal against Scotland earlier the tournament.

He, along with Mushfiqur Rahim, who smashed his way to 89 off 77 balls, lifted Bangladesh from a sloppy start by adding 141 runs for the fifth wicket.

The partnership was another World Cup record for the Bangladesh side.

Paceman Anderson had provided England a fiery start by removing both the openers — Imrul Kayes (2) and Tamim Iqbal (2) — in his first two overs but the following batsmen showed a lot determination.

Mahmudullah first shared a 86-run stand with Soumya Sarkar (40) to stabilise the innings and then combined with Rahim to stitch up a decent total.

Mahmudullah’s 103 came off 138 balls with seven hits to the fence and two over it and Rahim punished the British bowlers by eight fours and a six.

Bangladesh could have scored more but Jordan bowled a fantastic penultimate over in which he gave away just three runs and took a wicket too.