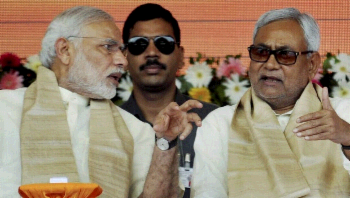 PATNA: Voting will be held in 55 seats tomorrow in the penultimate phase of Bihar election, with stakes high for BJP as it had along with its then ally JD(U) bagged majority of seats in last Assembly polls. BJP had won 26 out of 55 seats spread across seven districts of Muzaffarpur, East Champaran, West Champaran, Sitamarhi, Sheohar, Gopalganj and Siwan in 2010 Assembly polls. Its then ally JD(U) had emerged victorious in 24. RJD had won 2 seats and Independents 3. But the scenario has changed this time. From the grand secular alliance camp, RJD has now fielded candidates in 26 constituencies followed by JD(U) in 21 and Congress 8. From NDA on the other hand, BJP fielded its nominees in 42 seats in this phase, LJP in 5 and Hindustanti Awam Morcha and Rashtriya Lok Samata Party (RLSP) in 4 seats each.

A total of 1,46,93,294 electorate will be able to cast vote on 14,139 polling stations on November 1 to elect their representatives from 776 candidates of which 57 are women. On the basis of assessment of security situation, polling will be held from 7 AM to 5 PM in 43 constituencies, while it will be shortened by one hour in 8 seats and voting would end at 3 PM in four seats, Additional Chief Electoral Officer R Lakshamanan said. He put the number of polling stations in LWE (Left Wing Extremist) affected areas at 3043. Altogether 1163 companies (each comprising 100 personnel) of Central Paramilitary Force and state police will be posted to ensure free and fair elections. A total of 38 motor boats will be pressed into services for riverine patrolling tomorrow. Balloting has already completed on 131 seats in the earlier three rounds. After completion of fourth phase, voting would be over in 186 seats. The last phase of polling is scheduled on November 5 on the remaining 57 seats. Counting of votes is on November 8. The fourth phase saw high voltage campaigning with both BJP-led NDA and JD(U)-RJD-Congress alliance accusing each other of trying to polarise voters on communal lines. “If BJP loses Bihar elections even by chance, though victory or defeat will happen in Patna, there will be bursting of firecrackers in Pakistan,” BJP chief Amit Shah had said at a rally at Raxual in East Champaran district on Thursday, three days before the fourth phase polling. Rivals JD(U), Congress and RJD saw the comment as an attempt to communalise voters for the next two rounds on 112 seats and approached the Election Commission.

Acting on the complaint, the state Election Office has sought report from District Magistrate of East Champaran and West Champaran on the remark. Lalu Prasad slammed Shah linking the controversy with the pride of the state alleging the remark was an affront on the citizens of Bihar particularly backwards, EBCs, dalits and minorities who are “firmly rooting” for secular alliance. Prime Minister Narendra Modi addressed two rallies at Gopalganj and Muzaffarpur before the campaign ended last evening. Continuing with his earlier attack on Chief Minister Nitish Kumar and Lalu Prasad, the PM again alluded to the alleged “sinister plan” of Nitish and Lalu to carve out 5 per cent quota from OBC, SC and ST to give to a particular community. Prominent personalities whose fate would be decided in this phase are senior minister Ramai Ram (Bochaha, SC seat), Ranju Geeta (Bajpatti) and Manoj Kushwaha (Kudni). Lakshamanan said 191 arms/weapons, 56 explosives, 595 cartridges and 17 bombs were seized. A total of Rs 5.32 crore of unaccounted cash and 1,58,246 litres of illegal liquor valued at Rs 2.90 crore were seized, he said.