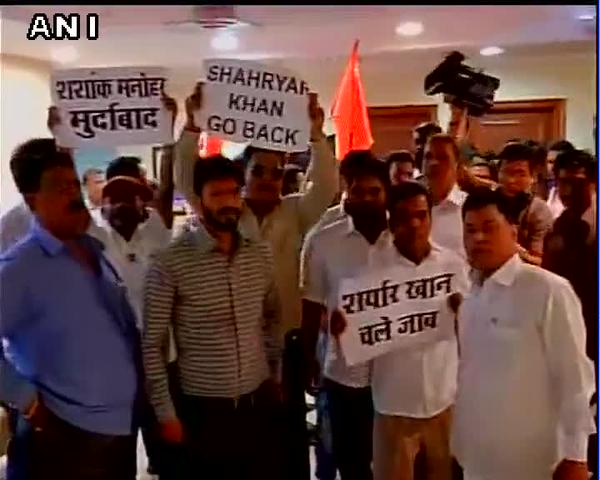 The much-anticipated talks between BCCI President Shashank Manohar and his Pakistan counterpart Shahryar Khan on the proposed bilateral series have been rescheduled for Tuesday after protests by Shiv Sena activists forced the Board to cancel the meet in Mumbai.

The meeting was to take place in Mumbai on Monday but was cancelled after 40 to 50 members broke into the BCCI’s headquarters at the Wankhede Stadium in Mumbai and “gheraoed” president Shashank Manohar, saying, “We will not allow any cricket ties with Pakistan.”

The Shiv Sainiks charged into the office chanting ‘vande matram’ and slogans against PCB chief Shahryar Khan. They were carrying saffron flags of the party and black flags to condemn resumption of Indo-Pak cricketing ties.

However, protesting workers were later taken away by police.

“The talks have not been called off. Mr Manohar and Mr Khan will speak to each other on Monday evening and on Tuesday they are coming to Delhi for another round of talks,” IPL Chairman and senior Board functionary Rajiv Shukla told the news agency.

“In no way, the dialogue will be stopped. BCCI has never compromised with national interests,” he said.

“BCCI is a responsible body and will not do anything against national interest. Cricketing decisions should be left to BCCI,” he added.

“Cricket is a gentleman’s game and the spirit of the game expects same generosity and tolerance from those who love the game,” he further tweeted.

Reacting to the incident, Congress leader Manish Tewari said, “Law and order has completely broken down in Maharashtra. Ghulam Ali, Kasuri ji and now Shahryar Khan- this is this how you treat guests.”