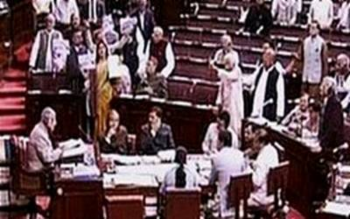 New Delhi, Dec 22 (IANS) The Rajya Sabha’s proceedings were again disrupted on Tuesday over the Delhi and District Cricket Association issue, as Congress members raised slogans against the government. Congress leader Kumari Selja raised the issue soon after the upper house met. Deputy Chairman P.J. Kurien, however, said an allegation against a member cannot be raised without prior notice. The deputy chairman tried to make the house function, but the din continued. After around half an hour, the house was adjourned till 12 noon. The proceedings in the upper house were disrupted on Monday as well after Congress members demanded Finance Minister Arun Jaitley’s resignation over alleged corruption in the DDCA.