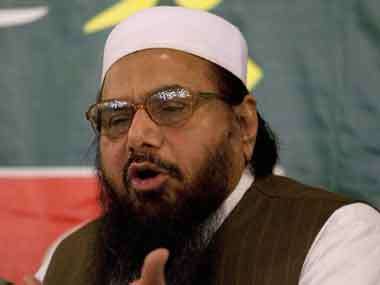 The move has come amid international pressure on Pakistan to stop making a distinction between good and bad militants after Taliban gunmen stormed an army-run school in Peshawar and killed 150 people, including 136 students, last month.
Foreign Office Spokesperson Tasnim Aslam confirmed the ban at her weekly news conference today.

Even as the ban comes amid intense US pressure to take action against Haqqani Network and other terror groups, Aslam said, “Pakistan took this decision under the UN obligation and not under pressure from any other quarter including John Kerry (US Secretary of State).”

She said bank accounts of banned groups have also been frozen and foreign travel restrictions have been imposed on Saeed, Radio Pakistan reported.

The decision comes days ahead of US President Barack Obama’s visit to India to be the Chief Guest at the Republic Day Parade on 26 January.

Earlier, a Pakistani official said the decision to ban the JuD and several other groups was taken by the government several days ago and it had tasked the Interior Ministry to decide the modalities of implementing the decision.

The ministry followed the orders by including the name of JuD and Falah-i-Insaniat Foundation (FIF), the two groups of Saeed, in the list of banned organisations for their involvement in extremism and militancy.

The FIF is a charitable front for Pakistan-based Lashkar-e-Taiba terror group and has been banned by the US.

Saeed, who also has a US bounty of 10 million dollars on him, roams freely in Pakistan and often addresses public rallies in which he routinely makes inflammatory statements against India.

Pakistan has maintained that there is no case against Saeed and that he is free to move in the country as a Pakistani national.

India has repeatedly demanded Pakistan to hand over Saeed for questioning over his role in the 2008 Mumbai attacks that claimed 166 lives.

The official said other prominent groups banned include the feared Haqqani Network involved in several deadly attacks in Afghanistan. The US has been long demanding action against the Haqqanis and the JuD.