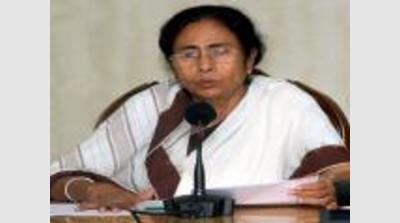 Wooing investors, West Bengal Chief Minister Mamata Banerjee today said there is no communal tension in the state, in comments that came barely days after the communal violence in Malda. With the state assembly elections round the corner, the Trinamool Congress chief also assured industry captains that her party will not come in the way of investment in the state, claiming her government will retain power.
“We have already set up a core group for industries. Our elections are coming but don’t worry everything will be sorted out. Democracy will continue. This elected government (TMC government) will come up ( will return),” Banerjee said addressing the third edition of Bengal Global Business Summit here.Claiming that a peaceful atmosphere prevailed in West Bengal, she said it was the most conducive aspect for setting up industries.Only political critics try to portray Bengal as a violent state, she said.”Bengal is a peaceful state where we all work together. There is no such communal incident or tension. Somebody might criticize it politically. We don’t allow all these (communal problems). Because we know that if there is peace everything is settled,” Banerjee said.She also referred to the “peaceful atmosphere” at the Maoist hotbed of Jangalmahal.Her comments came against the backdrop of the communal violence that broke out at Kaliachak in Malda, which had prompted the Union Home Ministry to seek a report from the state government.Banerjee said availability of land won’t be a problem in Bengal as the state government has a land policy and a land bank.”Some people are saying that there has been no investment. It is not true. The projects worth Rs 94,000 crore investment have already taken off. Some of the projects we had signed had already started,” Banerjee said.Union Finance Minister Arun Jaitley, who spoke at the summit, said investors anxiously look forward to an environment to see their investments were yielding results.”If you are not in a position to attract that, then investments will dry up,” he warned.Opposition parties like CPI-M, Congress and BJP had yesterday termed the event as a “drama” and said it will complete the process of de-industrialisation in Bengal.