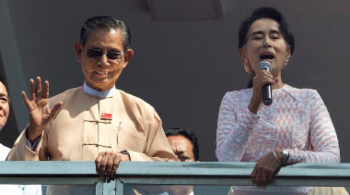 (9 Nov) The acting chairman of Myanmar’s ruling party conceded defeat to Aung San Suu Kyi’s opposition on Monday and said he would accept the result of the country’s first free national election in 25 years. “We lost,” Union Solidarity and Development Party (USDP) leader Htay Oo told Reuters in an interview.

The vote count is still under way and no results have been officially announced, but preliminary reports from around the country indicate a wide margin of victory for Suu Kyi’s National League for Democracy (NLD).

“We have to find out the reason why we lost,” Htay Oo, a close ally of President Thein Sein said. “However, we do accept the results without any reservations. We still don’t know the final results for sure.” Htay Oo said he was surprised by the scale of his defeat in his own parliamentary constituency in Hinthada, in the delta region, considered the heartland of the USDP’s rural support base. “I wasn’t expecting it because we were able to do a lot for people in this region.” he said. “Anyway, it’s the decision of the people.”