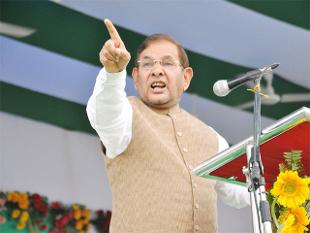 New Delhi: JD(U) president Sharad Yadav on Saturday attacked the NDA government over Prime Minister Narendra Modi’s remarks on addressing farmers’ woes, alleging that they are only “selling dreams” and have “no policy or programme”

He was reacting to the Prime Minister’s remarks yesterday attacking opposition for “spreading lies” that the government was working against the interests of the farming community.

Facing attack over the new Land Acquisition Bill, Modi had contended that he had lived among the farmers and he could understand their plight and was working with “good intention” to address their woes.

The Prime Minister said this yesterday speaking at a public meeting in Bengaluru.

Retorting, Yadav said,”what is the worth of intention if it is not backed by concrete policy and programmes. Results when come only when policy and intent both combine. This government completely lacks on policy front. The government had promised to create two crores of employment. It sold many such dreams. But none of them were fulfilled.”

He said that instead of talking of “intent alone”, the government should come out with a clear road map and spell out is policy prescription to remove poverty, create employment and provide succour to farmers.

Last month, Yadav coordinated a march of odd a dozen opposition parties from Parliament to President House against the new land law alleging that the NDA government’s measure was “anti farmer and pro corporate”.

The JD-U President was earlier the NDA convenor when his party and BJP were together before parting ways in June 2013 over Modi’s elevation within his party before Lok Sabha polls.