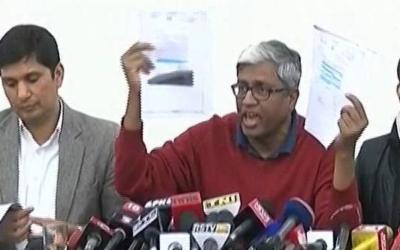 The Aam Aadmi Party has made fresh accusations against the BJP and in a bid to counter claims made by the finance minster. They have also questioned the role of as the president of Himachal Pradesh Cricket Association and said that Thakur cannot wear two hats. They produced two letters claiming Arun Jaitley misused his power and had written to the police seeking closure of the probe. AAP leader Ashutosh claimed that they had posed five questions to Jaitley to which they have not yet received any reply. The party reiterated their resignation demands. The five questions are:
Being an eminent lawyer yourself, can you deny that your action amounts to directly obstructing the police investigation in an ongoing case?
Mr. Jaitely, on what basis did you conclude that the complaints regarding Syndicate Bank were unsubstantiated and disclosed no offence?
Given your political clout in this central government, is it fair for you to continue as a central minister, particularly when the Delhi Police directly reports to the Centre?
Mr. Jaitley, What was your interest in attempting to derail the investigation and did you reveal your action in the next DDCA AGM?
Mr. Jaitley, is it not a fact that you misused your position as Leader of the Opposition (LoP) of Rajya Sabha to pressurize the Delhi Police?
Escalating their attack, Ashutosh further said that Jaitley made attempts to interfere and cover-up the graft charges, as he was well aware of the rampant corruption going on in the DDCA. DDCA Row: Arvind Kejriwal refuses to apologise to Arun Jaitley.