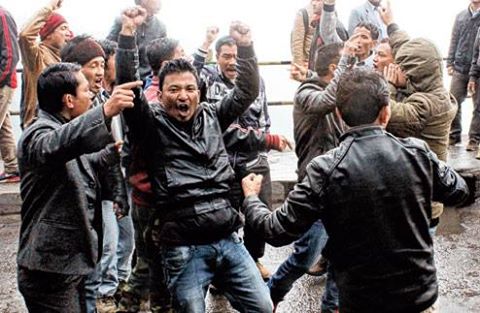 Darjeeling: Gorkha National Liberation Front (GNLF) supporters blocked NH-55 near Ghoom station in Darjeeling in protest against the assault on them allegedly by cadre of Gorkha Janmukti Morcha (GJM), the police said Thursday.

Acknowledging the receipt a complaint against GJM cadre, Superintendent of Police of Darjeeling Akhilesh Chaturvedi said, “There was a confrontation between GNLF and GJM supporters at Ghoom yesterday. We have assured the complainants of arresting those involved in the assault.”

The incident took place around 3:30 pm when GNLF supporters were returning home after attending the death ritual of their party founder Subash Ghisingh, he said.

The police said that the clash broke out when some GNLF supporters allegedly started to abuse GJM president Bimal Gurung who was returning home to Darjeeling from Maneybhanjyang.

Subash Ghisingh died on January 29 in a Delhi hospital and was cremated in his ancestral home in Mirik. As per Buddhist custom, his death ritual was held yesterday at his residence in Darjeeling after 21 days of his death.