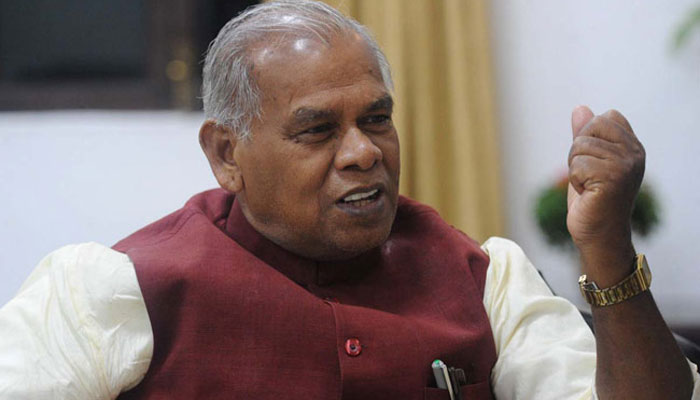 Patna: Embattled Bihar Chief Minister Jitan Ram Manjhi dramatically resigned on Friday just ahead of a floor test, the move coming despite the BJP extending support to him.

Manjhi, while announcing the decision to quit, said that he did not get respect as chief minister.

“I have submitted my resignation letter to the State’s Governor. I should have quit before,” said Manjhi soon after he met Governor Keshri Nath Tripathi this morning.

Manjhi claimed that he as well as some legislators had received threats to their lives.

Manjhi was picked by former chief minister and JD-U leader Nitish Kumar as his replacement when he quit last year after JD-U’s rout in the Lok Sabha polls.

In the 243-member assembly, the JD-U has 115 legislators – most of whom are with Nitish Kumar. The party has the support of 24 Rashtriya Janata Dal (RJD) legislators, five Congress MLAs, two Independents and a CPI MLA.

The BJP has 88 legislators and is supported by three Independents.

Nitish Kumar was quick to react on Manjhi’s resignation and said, “Our stand has been vindicated.”

He told reporters that the “BJP game plan has been exposed”.

Manjhi said that he had requested Governor Tripathi to hold a secret ballot and “in that case, I would have had the support of 40-50 JD-U legislators”.

But, since “I realised that secret ballot may not happen, a lot of legislators would have lost their membership if it would have been known that they had voted for me, that’s why I decided to quit”.

Manjhi maintained that “quite a few MLAs had met him in the night and pledged support to him”.

He accused JD-U of “horse-trading”, an euphemism for driving a hard bargain to ensure adequate numbers in a floor test.

On Thursday, BJP leader Sushil Kumar Modi said that the BJP decided to support Manjhi during the confidence vote in the assembly Friday.

“After a long meeting of the BJP legislators, the party has decided to support Manjhi during his confidence vote in the assembly,” Modi had said.

The Speaker accepted Nitish Kumar’s demand that JD-U be given the status of the main opposition party.

Manjhi, after being expelled from the JD-U Feb 9, has been declared as an unattached member in the assembly. He was expelled for allegedly “indulging in anti-party activities.