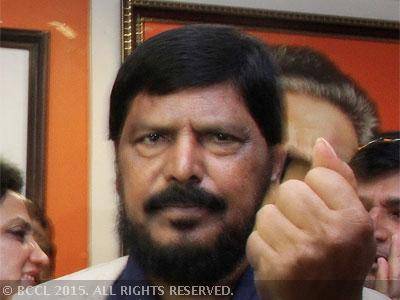 Mumbai: RPI(A) Leader Ramdas Athavale today demanded that smaller allies of the BJP-Shiv Sena government in Maharashtra should also get a representation in the ministry and coordination committee.

All ‘Mahayuti’ (grand alliance) partners played a key role in defeating the Congress and NCP and installation of the new government. But the smaller allies are now being sidelined, he said.

“The smaller allies should get a place in the ministry and coordination committee as well,” Athavale demanded while addressing reporters here.

All the smaller allies of BJP and Sena are meeting on February 21 to discuss their strategy to stay united.

“Our aim is not to oppose the government, but discuss issues concerning the state and the need to stay united,” he said.

Condemning the attack on senior CPI leader Govind Pansare, Athavale expressed concern over the attackers still being at large.

“I will not say the Home department under Chief Minister Devendra Fadnavis has been a failure, but intelligence network needs to be strengthened,” he said.

When asked about Shiv Sena youth wing President Aditya Thackeray’s proposal for the revival of Mumbai’s night life, the RPI(A) leader said the facilities should be for poor people as well.

“Mumbai’s famed street food joints should be open 24 hours at affordable price in the vicinity of main railway stations,” he suggested.

The issue of Mumbai’s night life should be discussed in the BJP-Sena’s coordination committee as both the allies are not on the same page over the subject, he said.

Stating that earlier railway budgets had ignored Maharashtra’s interests, he said that, “Now there are lot of hopes from (Railway Minister) Suresh Prabhu. There should be a separate track for Express trains in Mumbai,” he demanded.

When asked about the proposed Ambedkar memorial at the Indu mill compound here, Athavale said all formalities have been completed and the Bill in this regard would be tabled during the state Budget session which will begin on March 9.

“I have got an assurance that the foundation stone laying ceremony would be done on April 14, the birth anniversary of Dr Ambedkar,” he added.