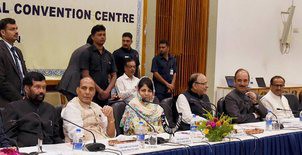 Adopting a tough stance, separatists today rebuffed attempts by five opposition MPs to talk to them even as an all-party parliamentary delegation explored ways to end the 56-day-old unrest by holding discussions with Chief Minister Mehbooba Mufti and some other mainstream leaders.

During the first day of its visit, the delegation met about 200 members in about 30 delegations from various sections of society and listened to their point of view to reach at a common solution to the current scenario in Jammu and Kashmir, a statement from the Home Ministry said.

While the delegation, led by Union Home Minister Rajnath Singh, met mainstream sections, five members of the group broke away to meet the separatists.

At Geelani’s residence, the gate was not even opened for the MPs while people shouted slogans outside. Geelani saw them from the window but refused to meet the parliamentarians.

“It is our effort to show that we are ready to talk to anyone whether they agree to meet or not,” Yadav said.

The group also went to meet JKLF chief Yaseen Malik who is under detention at BSF camp in Humhama. He told the MPs that he will talk when he visits New Delhi.

Owaisi went separately to meet Miwaiz who met him briefly but only exchanged pleasantaries.

After Owaisi’s failed attempt, the group comprising Yechury, Yadav, Raja and Narayan went to meet the Mirwaiz and were with him for about 15 minutes.

The group tried to meet former Hurriyat Chairman Abdul Ghani Bhat who also refused to talk to them. Bhat welcomed the leaders but made it clear it has been decided that no talks will be held with the delegation members.

Owaisi said he also met another detained leader Shabir Shah for some time and offered ‘namaz’ along with him there.

But no separatist leader held talks with them.

“This is a futile exercise. Nothing concrete will happen until or unless India talks to Pakistan on Kashmir. We will not be able to arrive at any solution if India only talks to Kashmiris or Pakistan talks to Kashmiris. We should try and solve this issue which can otherwise result in hostilities between the two neighbouring nations,” said Ghani Bhat.

Earlier in the day, the separatists rejected Chief Minister Mehbooba Mufti’s invitation to them for meeting with all-party delegation, terming such a measure as “deceitful” and insisting that it cannot be an alternative to a “transparent agenda-based dialogue to address the core issue”.

The delegation had come here to cool the volatile situation arising out of violent protests that have gripped the Valley since the killing of Hizbul militant Burhan Wani on July 8. The clashes resulting from the protests have claimed 71 lives and injured thousands. PTI