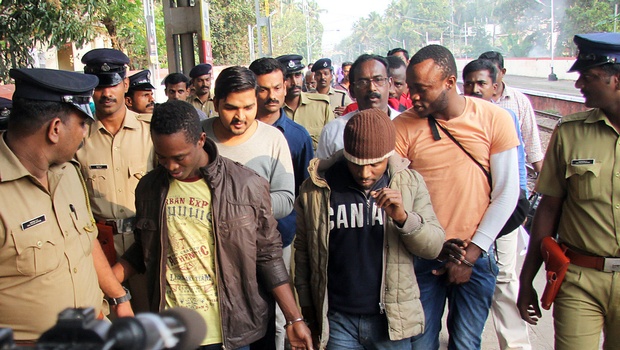 Chennai, Apr 28 (PTI) Two accomplices of a Delhi-based gang that swindled several lakhs of rupees online after getting account details of credit and debit card holders have been arrested and a hunt is on for others, police said today.

Delhi based Deepkumar and Praveenkumar Kashyap, retailers in mobile phone SIM cards were arrested by a Central Crime Branch team in the national capital for allegedly providing SIM Cards for ‘vishing’ (online fraud) to gang operators Ashraf Ali and Sunny after forging documents to get such cards.

Police said the duo was produced before a local court and remanded to judicial custody yesterday and police are on the lookout for Ali and Sunny with a special CCB team camping in Delhi.

Police said that the case came into fore following complaint by ICICI Bank that details including CVV number of 42 of its customers who hold bank cards were collected through phone in a fraudulent manner by some claiming to be genuine agents. Similar complaints were also received from others.

Later, customers were billed and charged for things they never ordered and money debited in their accounts and credited to account in the name of Ali and Sunny.

During probe, it was found that Deepkumar and Kashyap took several photocopies of identity and address proof papers of customers and used one set of it to get new mobile numbers.

The duo forged the signatures of their customers and used another set of the same documents and allegedly used it in a fraudulent manner to get several other SIM cards in Delhi, Gurgaon and Noida.

Then they sold such cards to Ali and Sunny who were running online shopping firms “AM Shopping in” and “Kamkashi Solutions”, police said.

By using such SIM cards Ali, Sunny and their employees used to make phone calls and collect confidential data like CVV number from credit and debit cards holders based in states like Tamil Nadu by claiming to be genuine agents. They employed persons knowing languages including Tamil, Hindi and English to dupe bank card holders.

Later, they would send unsolicited articles to them and by misusing confidential data they got, would swindle money from their accounts online.