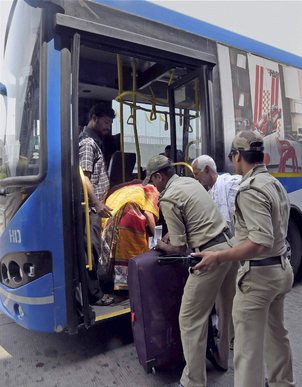 New Delhi, Apr 30 (PTI) The 24-hour transport strike began today, affecting normal life in several parts of the country including in Kerala and Karnataka, even as the Centre asked private operators and employees of state transport authorities to call off their strike.

In Kerala, public transport buses, taxis and auto- rickshaws were off the roads, although private vehicles were plying.

The strike has been called jointly by national level road transport organisations representing both public and private sector workers which are affiliated to central trade unions like AITUC, CITU, BMS, INTUC, HMS, AICCTU, LPF and state-level outfits in protest against the proposed Road Transport and Safety Bill, 2015.

Road Transport and Highways Minister Nitin Gadkari appealed for calling off the strike, terming their concerns as ‘premature’. He said that wide consultations would be held with all stakeholders on the bill.

Commuters in Thiruvananthapuram, who depend on Kerala State Transport Corporation buses, had tough time reaching their work places as the buses did not operate.

No untoward incident has been reported from any part of the state since the strike began at midnight last night.

Examinations being conducted by various universities in the state have been postponed due to the strike.

Services of public transport buses and auto rickshaws were also affected in different parts of Karnataka.

Incidents of stone pelting on public transport buses were reported from different parts of the state including Bengaluru, Hubballi, Bellary and Raichur, Mysuru.

Transport department officials said they are plying buses based on the requirement as the number of passengers coming to bus stands is scarce, adding that they are also trying to convince the employees to attend to duty and not to cause hindrance to public. .