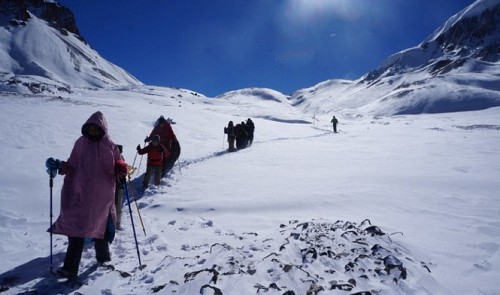 Two European climbers have been swept away by an avalanche while a veteran Japanese mountaineer has plunged to his death in a separate tragedy in the Himalayas, officials said Saturday.

“Two climbers — one German, the other Italian — were swept away in an avalanche on Shisha Pangma,” said Ang Tshering Sherpa, president of the Nepal Mountaineering Association.

In a separate accident, Japanese climber Yoshimasa Sasaki fell to his death on Friday when he slipped during an ascent of Mount Manaslu, the world’s eighth-highest peak, located in northwest Nepal, according to a tourism ministry statement.

“Rescuers are working to recover the body… (which) will be brought to Kathmandu as soon as possible,” the tourism ministry said.

‘Snow is killing us’

Dynafit said the force of the Shisha Pangma avalanche threw the two victims, along with German teammate Martin Maier, across steep glaciers, dragging them down for around 2,000 feet before landing them in an inaccessible section of the mountain.

Their teammates attempted a rescue but were forced to turn around because they could not reach the victims, the company said.

“Sebastian and Andrea disappeared with the avalanche and their bodies could not be found.”

Maier, who miraculously survived the accident, was receiving medical attention.

Haag, a former veterinary surgeon, had accomplished several speed climbs and high-altitude ski challenges during his mountaineering career. Zambaldi worked in the sales and marketing division of Dynafit.

Switzerland’s Ueli Steck, the most experienced mountaineer in the team, made headlines last year when he and two other Western climbers traded blows with a group of furious Nepalese guides over a climbing dispute on Mount Everest.

The Dynafit team had planned to speed-climb and ski down Shisha Pangma and the 26,906 foot Cho Oyu peak, located on the Nepal-China border, via foot, ski, and bicycle in under a week.

Haag and Zambaldi had been forced to turn back during their first attempt ten days ago due to heavy snowfall and the threat of an avalanche, according to the official expedition blog.

As they neared the summit last Tuesday night, Zambaldi blogged: “The snow makes progress really tough. In steep sections we sometimes sink in up to the hip or chest.”

“Let’s hope the mountain gives us a chance.”

By early Wednesday the weather was worsening, with teammate Benedikt Boehm writing: “We are so close, but… the avalanche situation is still a bit tense and the deep, windblown snow is killing us.”

Shrouded in mystery and closed to westerners until 1978, Shisha Pangma is considered a relatively accessible peak to summit with many expeditioners recommending that climbers attempt it as part of their training before turning their attention to higher mountains.

At least two dozen climbers have died on Shisha Pangma, including US mountaineering legend Alex Lowe, who was killed in a massive snow and ice avalanche in October 1999 while attempting the first American ski descent of an 26,000-foot peak.

Sixteen Nepalese guides were killed last April in an ice avalanche on the world’s highest mountain, Mount Everest, in the worst disaster to strike the 29,029-foot peak.