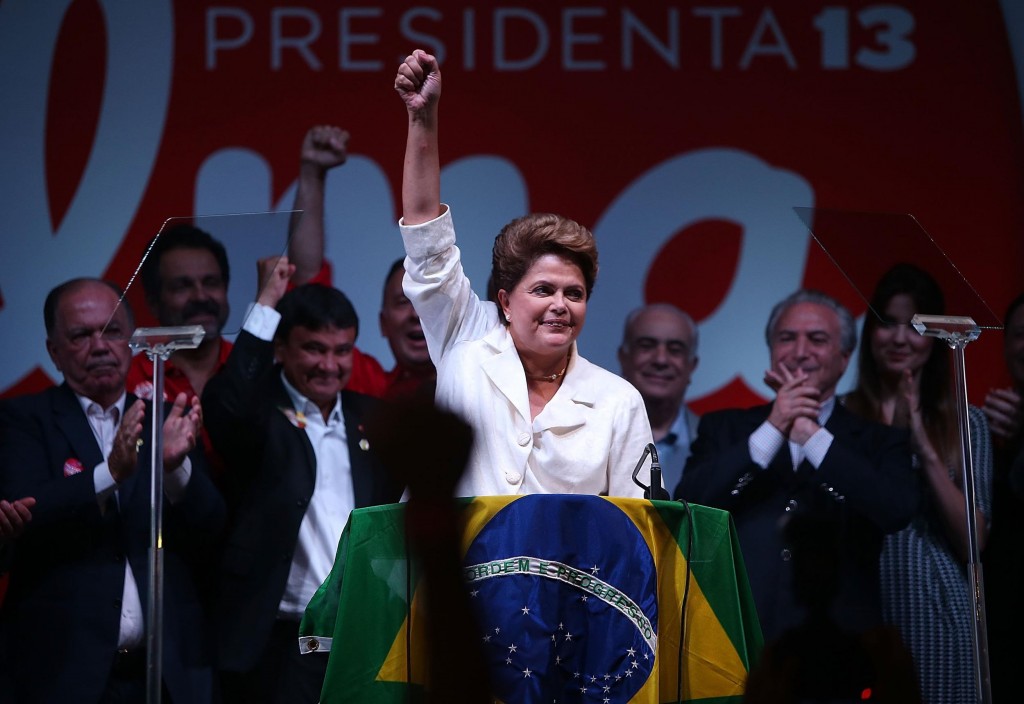 Ms. Rousseff, of the leftist Workers’ Party, defeated Aécio Neves of the conservative Brazilian Social Democracy Party, or PSDB, by 52% to 48%, the tightest presidential race in the nation’s history. The contest, marked by bitter rhetoric and harsh accusations on both sides, left Brazilians split along economic and regional lines.

In her 27-minute victory speech at a hotel auditorium in Brasília, the capital, Ms. Rousseff offered some conciliatory notes for the nation as a whole, calling for “peace and union.”

Still, she didn’t mention either Mr. Neves or his party by name, nor did she refer to Marina Silva, the Socialist Party candidate, who finished third in Oct. 5 first-round voting and was eliminated from the race.

nstead, Ms. Rousseff repeatedly thanked her still-popular predecessor and mentor, former President Luiz Inácio Lula da Silva, who stood on stage beside her, and heaped praise on her supporters and colleagues with the Workers’ Party, known as the PT.

“Her speech may have been better than the pessimists expected, but it was below what the optimists expected,” said Carlos Melo, a political scientist and professor at Insper, a São Paulo-based education and research center.

For his part, Mr. Neves alluded to the theme of reconciliation in a brief concession speech minutes before Ms. Rousseff spoke. Addressing supporters at a hotel in Belo Horizonte, in his native state of Minas Gerais, a smiling but subdued Mr. Neves said he had phoned Ms. Rousseff to wish her government success.

“And I highlighted that the greatest of all priorities should be to unite Brazil around an honorable project that dignifies Brazilians,” Mr. Neves said.

Ms. Rousseff’s other, equally formidable task is to persuade investors that her administration can work with businesses to reset Brazil’s economy. A commodity boom that fueled robust growth on Mr. da Silva’s watch fizzled during Ms. Rousseff’s first term. Brazil fell into recession this year and is dogged by high inflation, rising debt and low productivity. Standard & Poor’s in March downgraded the nation’s sovereign debt to one level above junk.

In her speech, Ms. Rousseff vowed to combat inflation and take measures to boost industrial output.

“I will promote actions in the economy to resume our growth speed [and] ensure high levels of employment,” she said.

But Ms. Rousseff so far has shown little willingness to tackle big structural overhauls, such as changing Brazil’s tax system and cutting red tape, moves economists say are needed to put Brazil on a faster growth path. Her administration instead has leaned heavily on state-owned institutions to extend credit and dole out subsidies to consumers and businesses, measures economists say are unsustainable.

“The reforms that are needed to reinvigorate the economy require moving Brazil from a consumption-led to an investment-led growth model,” Neil Shearing, an economist at Capital Economics, wrote in a release last week. “This in turn means shifting income from ordinary workers—which form Dilma’s core support—to companies, and will thus require her to take on vested interests within her political base. All of this seems a tall order.”

The president also pledged to “fight corruption,” “strengthen regulators” and “end impunity,” an apparent reference to a series of scandals that have bedeviled the Workers’ Party. Ms. Rousseff and Mr. Neves relentlessly attacked each other’s integrity in the campaign’s concluding days, including a bruising final debate on Friday evening in which they traded barbs about a deepening corruption scandal at state-owned Petroleo Brasileiro SA, PETR4.BR -11.53% Brazil’s largest company.

Finally, Ms. Rousseff must reckon with an opposition that, despite losing Sunday’s election, seems to have been invigorated by its strong showing in a close race.

“What is called opposition in Brazil is a very large force,” said José Serra, a former governor and the PSDB’s presidential candidate in 2002, when he lost to Mr. da Silva. “We are going to use that force in benefit of Brazil, of its unity, and to overcome the problems we’re experiencing in the economy, in education and in health.”