BREAKING NEWS
11:13 AM
Home News Rahul can take over, Priyanka will be an asset: Amarinder 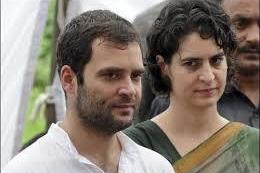 Rahul can take over, Priyanka will be an asset: Amarinder

As speculation raged over the issue, Punjab Congress chief Capt Amarinder Singh today said that time is right for Rahul Gandhi to take over from his mother as Congress President and favoured Priyanka’s entry into active politics.

“Sonia Gandhi is a brilliant leader. I have said that she has been working (as Congress President) for the last 20 years. If she feels that time has come to give it to a new generation, then she should pass it on and we will fully support Rahul (to take over),” he told a press conference here.

He was replying to a question whether time has come for Congress Vice-President to take over from Sonia Gandhi.

Singh said, “Look, she has not talked to me (on the issue). But what we are coming to know is that she is now feeling that the time has come for a new generation (to take over), which everyone today is saying.

“We are also saying so that 70 per cent of India’s population is under the age of 40 years. She also knows this, may be she feels she would like to hand it over to the new generation. I think there is nothing wrong in it.”

Asked if Rahul could take over this month itself, Amarinder said, “look, I do not know this. If Sonia wants to hand it over to Rahul ji, I think everybody will support”.

About Sonia, he said, “she has worked really hard. Let me tell you the amount of work she has put in since 1997, it is amazing”.

Asked if this will become a benchmark for party leaders who are over 70 years of age to quit in favour of younger generation, Amarinder replied, “No, its not a benchmark, everyone has his or her time. And everyone gets tired after a while.

“I have also announced that I am not going to fight another election. Why because I have done 47 years now.”

Amarinder Singh is leading the Congress’ campaign ahead of crucial 2017 Punjab assembly elections, where the opposition party is eyeing to wrest power from the SAD-BJP combine.PTI