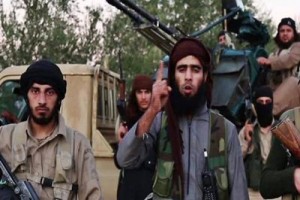 By ANI, 17 Nov 2015 11:01 AM
(17 Nov) Washington D.C, Nov. 17 (ANI): In a new video released by the ISIS, the terrorists have issued a warning saying that Washington should brace itself for an attack similar to the Paris carnage. The Washington Post reports that the terrorists were seen lauding the Paris shootings, however, the authenticity of the video could not be immediately confirmed but it bears close resemblance to the former videos released by the ISIS. The video which lasts for 11 minutes, reportedly showed clips of the aftermath following the airstrikes on the ISIS stronghold by French President François Hollande A man identified as “Al Karar the Iraqi”, threatened the ‘crusader’ nations who are fighting together against the ISIS and the U.S capital was specifically singled out, according to the daily.

“We say to the states that take part in the crusader campaign that, by God, you will have a day, God willing, like France’s and by God, as we struck France in the center of its abode in Paris, then we swear that we will strike America at its center in Washington,” the man says in the video. Another man in the video warned the European nations of Paris-style attacks. He was seen saying that the terror outfit was heading their way with ‘booby traps, explosives, and gun silencers’ and that they will be unstoppable as they have never been this strong before, the daily said. The Washington Post’s Metro section reported that the FBI’s Washington Field Office declined to comment about the purported video threat on Monday, but did refer to a statement it released in the wake of the Paris attacks on Friday. The ISIS claimed responsibility for the 13/11 carnage in Paris which has left at least 132 dead. France later carried out a massive retaliatory attack and dropped 20 bombs in an airstrike on Raqqa, Syria which is touted as the ISIS de facto capital.