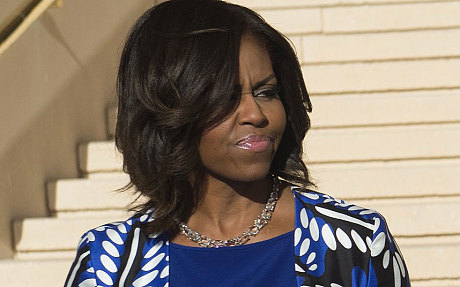 In a show of solidarity with Saudi Arabia, President Barack Obama cut short his visit to India and led a parade of American dignitaries in Riyadh on Tuesday to pay respects after King Abdullah’s death.

But it was the presence – and attire – of his wife Michelle which drew the most attention in the ultraconservative desert kingdom.

The First Lady dressed conservatively in black trousers and a long jacket, wearing loose clothing that fully covered her arms, but did not cover her head.

It is forbidden for Saudi women to appear in public without their heads covered, and most Saudi women wear niqabs.

Hundreds of Saudis took to Twitter using hashtags translating to “#Michelle_Obama_Immodest” and “#Michelle_Obama_NotVeiled” to voice their disapproval of her decision not to observe Saudi customs.

According to the Washington Post, more than 1,500 tweets were written on Tuesday using the hashtag, most expressing their disapproval.

Some pointed out that the First Lady had worn a headscarf on a visit to Indonesia, another predominantly Muslim country, in 2010.

However, others defended Mrs Obama by noting that it is not required for foreign visitors to abide by the dress code.

Mrs Obama is not the only female foreigner visible in photographs from yesterday’s four-hour trip with her head exposed – Condoleezza Rice, the former secretary of state, also did not wear a headscarf.
The Queen arrives in Saudi Arabia in 1979 (Rex)

Likewise, neither Hillary Clinton nor Laura Bush opted to cover their heads on visits to Saudi Arabia in 2011 and 2006 respectively.

The First Lady stood slightly behind her husband as they were greeted by Saudi officials, and waited for a gesture to be made to her by the men in the receiving line, according to ABC.
However, others noted that Mrs Obama looking noticeably aggrieved by her reception.
The First Lady looks less than impressed (AFP/Getty)

Some members of the all-male Saudi delegation shook Michelle Obama’s hand as they greeted the Obamas, while others simply nodded to her as they passed by.

Michelle Obama’s office did not comment on her attire.

The question of observing local protocols on state visits has caused headaches for the Obama White House in the past.

In 2009, Barack Obama was was photographed bending to nearly a 90 degree angle when he greeted the relatively diminutive Japanese Emperor Akihito and Empress Michiko at the Imperial Palace in Tokyo.
Reuters

At least one blogger went as far as to call the president’s actions “treasonous”.

Hours before arriving in Riyadh, Obama spoke at length about the importance of women’s rights during an address in India, setting up a jarring contrast with his warm embrace of Saudi Arabia, a country whre there are strict limits on women’s freedom.
Former Secretary of State Condoleezza Rice also eschewed a head covering on the Saudi visit (AP)

Obama was joined in Riyadh by Secretary of State John Kerry, along with Condoleezza Rice and James Baker, who led the State Department under Republican presidents. Former White House national security advisers Brent Scowcroft, Sandy Berger and Stephen Hadley also made the trip, as did Sen. John McCain, the Arizona Republican who is a frequent critic of Obama’s foreign policy in the Middle East.

Saudi Arabia’s new monarch, King Salman bin Abdul-Aziz Al Saud, greeted Obama at the steps of Air Force One after it landed in Riyadh. The two men had met previously, but Tuesday’s meetings marked their most substantive discussions.

Following a lavish dinner of grilled meats and Arabic desserts at the king’s opulent personal palace, Obama and Salman spent just over an hour discussing a range of regional issues. Among them: the campaign against Islamic State of Iaq and the Levant (Isil), the Syrian civil war and the political chaos in Yemen.

The Obama administration official said they also discussed Iran, both in the context of the US-led nuclear negotiations and what Washington and Riyadh see as the Islamic republic’s destabilising activities in the region.