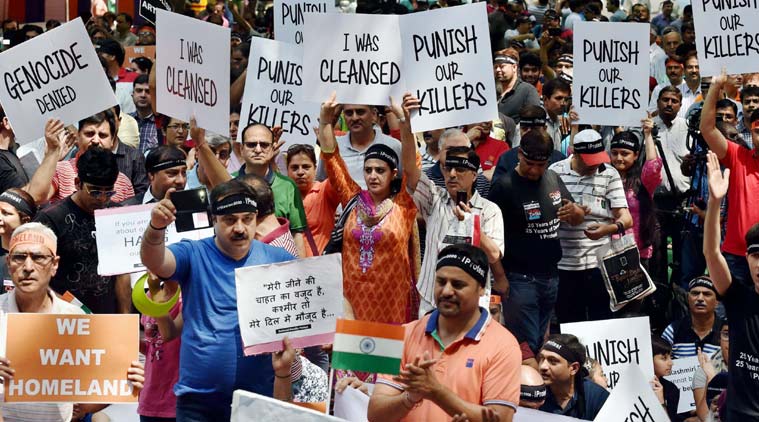 Thousands of Kashmiri Hindu employees who migrated to Jammu following mob attacks on their transit colonies in Kashmir, today held a protest rally against the state and the Central governments for “not reaching out” to the community.

As their protest entered the 54th day, they wore black bands and took out a march demanding registration of FIR and compensation to affected employees besides a high-level dialogue with both the Central and the state governments.

“Both the governments are begging the separatists to hold talks with all-party delegation but they have failed to reach out to these Kashmiri pandit employees of Valley and not even a single minister or top officer has reached out to them,” chairman of All Party Migrant Coordination Coommittee(APMCC), Vinood Pandita said.

“Kashmiri pandits cannot be made sacrificial goat by the Central government. We will not tolerate any talks with separatists,” he added.

The Kashmiri pandit employees, who were working in various government departments under the Prime Minister’s rehabilitation package in the Valley, returned to Jammu after their transit camps were attacked by stone-pelting mobs in the wake of the killing of Hizbul Mujahideen commander Burhan Wani on July 8.

The protesters demanded disbursement of their pending salaries, and forming of a comprehensive return and rehabilitation programme for entire Kashmiri Pandit community in the valley before their return resume duty.

“These employees have been sitting on protest for over 50 days. The governments are unmoved as if the Kashmiri pandit community does not exist,” said All State Kashmiri Pandit Conference President, Ravinder Raina.

“The Central and state governments failed to protect these Kashmiri pandit employees from mob attacks. They were forced to migrate from there. Instead of reaching out to them and give them confidence, they are left feeling unwanted,” he added.PTI.