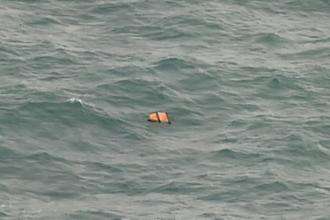 “We spotted about 10 big objects and many more small white-coloured objects which we could not photograph,” Indonesian air force official Agus Dwi Putranto told a press conference.

“The position is 10 kilometres (six miles) from the location the plane was last captured by radar,” he said.

He displayed 10 photos of objects resembling a plane door, emergency slide, and a square box-like object.

An AFP photographer on the same flight that spotted the debris said he had seen objects in the sea resembling a life raft, life jackets and long orange tubes