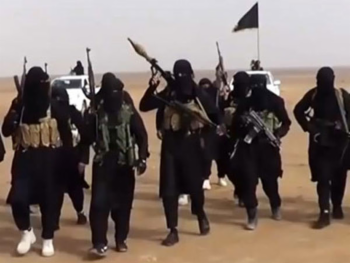 (3 Dec) New Delhi, Dec 3: The Sunni radical organisation Islamic State (ISIS) has threatened to wage war against India, Pakistan, Bangladesh, Afghanistan and several other countries in its e-book released on jihadist platform called Black Flags from the ISIS. The group for the first time has made a direct reference of Prime Minister Narendra Modi and ongoing political scenario in India in the e-book. “The war will rage in every country, and this is why there is (sic) over one-and-a-half billion Muslims in the world”. “They will fight the New World Order in every land and every place. The peak of this war against the New World Order will be the battle against al-Dajjal (the Antichrist),” it states, reported The Indian Express. Making a reference to Dadri lynching, ISIS termed PM Modi a “right-wing Hindu nationalist who worships weapons and wants a movement to kill cow eaters. “A movement of Hindus is growing who kill Muslims who eat beef. The people who fund these organisations want to grow a huge following of Islam-haters who can turn into potential recruits for future wars in their countries.” According to the group, PM Modi is preparing his people for a future war against Muslims”. “They have a political wing for the propaganda to get more recruits, and armed militias who can start a terror campaign against their number 1 enemy-the Muslims,” the group said. Read More: ISIS may carry out ‘lone wolf’ attack, warns Kiren Rijiju The government had said earlier said that banned terror group ISIS may carry out terror strikes anywhere in the country using a single terrorist also known as ‘lone wolf’ to create a mayhem.