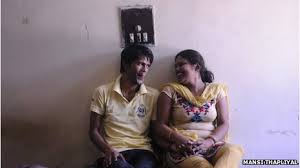 India’s Love Commandos – and the runaway couples they protect

Some photobooks strike you with the full force of their subject matter; others wend their way into your consciousness. For me, Max Pinckers’s self-published Will They Sing Like Raindrops or Leave Me Thirsty is among the latter. I’ve been mulling it over for weeks, and have decided that Pinckers has achieved something singular in his hybrid approach, which mixes documentary photography with staged scenes reminiscent of Bollywood movies.

The subject is love and marriage, Indian-style – both the extravagant imagery of Bollywood romance and the vexed topic of arranged marriage. Pinckers, a 26-year-old Belgian artist, spent four months travelling in India, shooting – and staging – the images of Will They Sing Like Raindrops … (The project won him first prize in this year’s

But central to this rich visual narrative is a series of photographs of a four-man activist organisation called the Love Commandos. Based in Delhi, they operate on a shoestring from their small, cluttered office, manning a telephone helpline and website to provide advice and support – including safe rooms and shelters across India – for runaway couples who have fallen in love across the boundaries of caste or religion. The commandos have even sent out teams to rescue young people at risk of violence.

The main function of the Love Commandos,” writes Hans Theys in his introduction to the book, “is to allow people to do this in safety and in accordance with the laws of India, and to prevent honour killings happening to the young couples.”

Though there is something romantic, even Bollywood-glamorous, about the idea of the Love Commandos, their work is dogged and dangerous. Pinckers punctuates the narrative with excerpts from their blog, often frantic or plaintive messages from people trapped by family or caste. A newspaper cutting found by Pinckers recounts how “Pooja Rani (24) and Shambau (26) … were forced to elope to escape the ‘honour’ police hounding them for intending to marry outside their caste … Believing that dying is a better option than being chased by cops and kin, they were on the verge of committing suicide when the Love Commandos rescued them and gave them a place in one of their shelters.”

The straight reporting and dramatic description that runs though the news report is revealing, not least because it could be the plot of a Bollywood romance. (There is even a happy ending – the Love Commandos organised the couple’s wedding, thereby legalising their status, despite the families’ opposition.)

Rather than approach this culturally fraught issue as reportage or documentary, Pinckers walks a tightrope between the real and the fictional. The result is a layered narrative that plays with Indian culture’s extreme and conflicting notions of romance: Bollywood escapism versus the reality of young couples escaping the confines – and sometimes violent recrimination – of family, tribe and society.

Pinckers’s poetic vision has a density that makes it wonderfully elusive, or frustratingly so. (Why the opening image of a tower of ice in a room?) The series on the Love Commandos, alongside touchingly intimate shots of couples relaxing in safety, would make for a more direct photobook, but that is not Pinckers’s style. Instead, his narrative is both obvious and tangential, detached and controlled. The deadly serious and the kitsch sit side-by-side, as do the deftly observed and the highly stylised. His colour suggests film stills or the warmth of old Kodachrome; his scenarios seem real yet filmic.

Sitting between conceptual and documentary, while upending expectations of each, Pinckers is still emerging, but his already singular style draws you in. Bemusing and captivating, Will They Sing Like Raindrops or Leave Me Thirsty has become a book I return to like a puzzle.