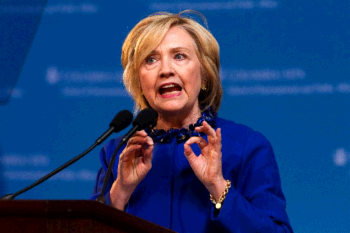 WASHINGTON: U.S. Democratic front-runner Hillary Clinton got the biggest boon to her bid to clinch her party’s nomination for the 2016 presidential race, after Vice President Joe Biden announced Wednesday his decision not to run for president. “The road is clear for Hillary Clinton,” Brookings Institution’s senior fellow Darrell West told Xinhua. “Biden would have been a formidable opponent and would have taken several months to defeat.” Indeed, Biden’s decision eliminates Clinton’s most serious opponent and greatly simplifies her political situation, West said, adding that Clinton can now position herself for the general election and focus on issues that distinguish her from the radical elements within the Republican party. Julian Zelizer, professor of history and public affairs at Princeton University, told Xinhua that Clinton will now be able to focus most of her attention on attacking the Republican Party (GOP) and building her message rather than