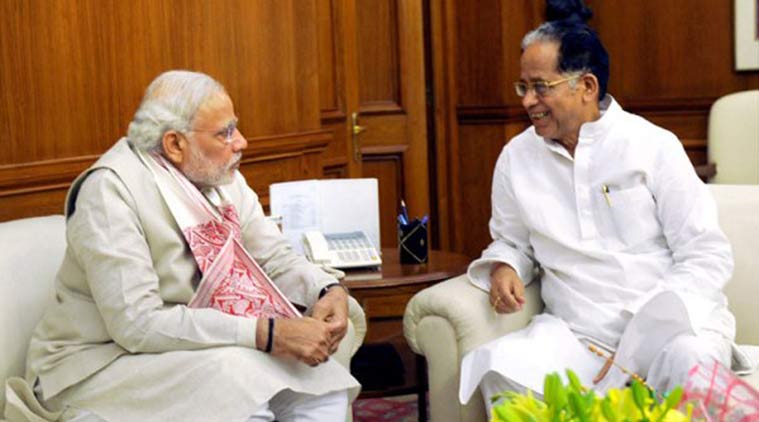 Assam Chief Minister Tarun Gogoi today accused BJP of spending “hundreds of crores” of rupees in an attempt to topple his government with the help of Governor, echoing allegations of his Himachal counterpart that BJP was trying to destablise Congress governments in states.

“BJP spent lots of money. They wasted hundreds of crores before the Bihar elections to topple the government in Assam.

They tried it by taking Himanta (Biswa Sarma) and other MLAs, but they could not do it,” Gogoi told a press conference here targeting the central government led by Prime Minister Narendra Modi who had launched a blistering attack on the Congress leader during the recent poll rallies in Assam.

Sarma, once a trusted Congress minister of Gogoi who is presently in BJP, had almost garnered the support of 35 MLAs and tried the same tactics used in Arunachal Pradesh and Uttarakhand of shifting the base to BJP, he claimed.

“The Governor (Padmanabha Balakrishan Acharya) was also involved in this. Without his support how is it possible? That is why, the Centre is not appointing a permanent Governor in Assam. That is why they are appointing all RSS people as Governors,” Gogoi alleged.

He further said if the 35 MLAs, whose support was shown to be withdrawn from Gogoi’s leadership in front of the Congress High Command, had really shifted their allegiance to BJP, the government would have fallen instantly.

Gogoi also regretted his decision to trust Sarma during his tenure with the Congress.

“Yes, I trusted him a lot. He betrayed a simple man like me. Himanta and all his supporters were not original Congressmen. They come and go. Himanta was with ULFA, then AASU, AGP, Congress and now (a) BJP man,” he said.

Talking about the Uttarakhand crisis, the Chief Minister said the entire development is “just a murder of democracy”.

“You did it in Arunachal and now Uttarakhand. The government was to test its majority next day and you (Centre) toppled it. (This is) Hitler in India! This is dictatorial and a murder of democracy,” he alleged.

Himachal Pradesh Chief Minister Virbhadra Singh had accused the Modi dispensation of trying to “destabilise and topple” his government by using central agencies. He alleged the Centre has been destabilising Congress-ruled states one by one and cited examples of Arunachal Pradesh and Uttarakhand where President’s Rule was imposed.PTI