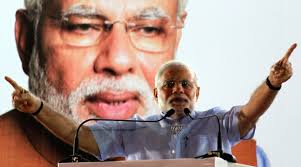 Posted By: govind ghimirePosted date: May 21, 2015in: NewsNo Comments

With one year complete of Modi Government the “Acche din Ayange” slogan yet remains to be a dream. The rural people opened bank accounts in huge numbers hoping that the Government would give them money as promised but a year gone by not a single penny has entered their accounts.
The suicide of poor farmers has not reduced in fact increased. The land bill to be passed by the Govt has been a big fiasco as it is blamed that it is completely in the favour of rich industrialist.

Modi in his latest foreign tour to all the countries has insulted India and Indians giving an impression that he carries a magic wand to wipe out the mess created by the past governments. Whatever India is today as it stands is a known fact is because of the previous governments.

All necessary commodities has seen a sharp rise of price, making the common the man difficult to manage his/ her household.

The business sector might look healthy but the businessmen have still crossed their fingers to see where it leads. Corruption to a certain extent has been controlled but petty bribes the police and government departments still exists.

The health sector has not witnessed any change and medical treatment for the common man seems to out of reach with expensive hospitals and nursing homes mushrooming all over India.

The education sector has not seen any developments with the education minister always being trapped in controversies with very less development. Her time seems to spent on protecting her statements on the media which she does so tactically.

The arrogance and attitude of the ministers are all out the media with violating rules to say that it is not applicable to V VIPs. The attitude shown during interviews of ministers exhibits their boisterous behavior.