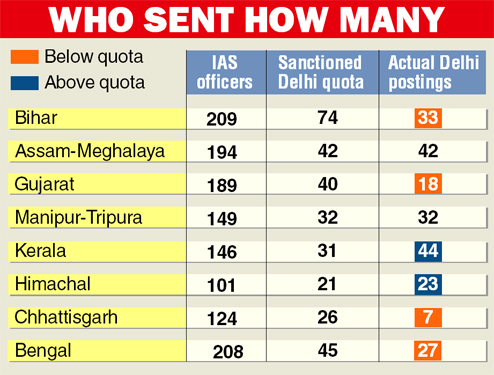 Centre offers to send officers on deputation to NE

New Delhi, Apr 29 (PTI) The Centre has offered to send its officers on deputation to north eastern states to help them overcome manpower shortage and execution of policy decisions.

“I understand that you have acute shortage of officers at middle level due to low intake of officers in civil services from 1992 to 2006.

“The state governments may like to utilise the experience of the Central Secretariat Service (CSS) officers at appropriate level on deputation basis,” Department of Personnel and Training (DoPT) Secretary Sanjay Kothari said in a letter to chief secretaries of Tripura, Nagaland, Mizoram, Meghalaya, Manipur, Assam, Arunachal Pradesh and Sikkim.

The CSS is one of the earliest organised services in the country and is an important constituent of the central government machinery.

Officers of the service provide a strong and permanent set up of middle level functionaries to the central government and contribute in policy formulation and its execution.

“The arrangement will enrich the officers with the required field experience at ground level in the execution of various schemes and policies and make them understand issues in a better way which will in turn improve their capacities,” Kothari said.

He has asked the state governments willing to take CSS officers on deputation to identify vacancy and tenure of posting and convey the same to the DoPT.

“This department will circulate the vacancies among CSS officers and nominate a panel of selected officers for deputation to state government and you can choose the suitable officer from the panel,” the letter said.