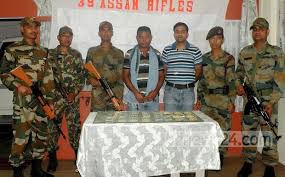 Kanchanpur (North Tripura): Troopers of the 30th battalion of Assam Rifles have arrested an alleged arms peddler from the Tripura-Mizoram border, based on specific intelligence information.

The arrested person has been identified as Bualmanga who was hiding in the Naisingpara refugee camp of Mizoram displaced people under Kanchanpur sub-division in North Tripura district.

An M16 rifle has been found from his possession.

The troops later handed over Bualmanga to the police for further interrogation.

During his visit, Rajnath Singh had discussed with the BSF officials the issue of fast completion of the border fencing with Bangladesh to stop smuggling, infiltration and the movement of militants.

He also met the Chief Minister of Tripura, Manik Sarkar and reviewed the security situation in the state.