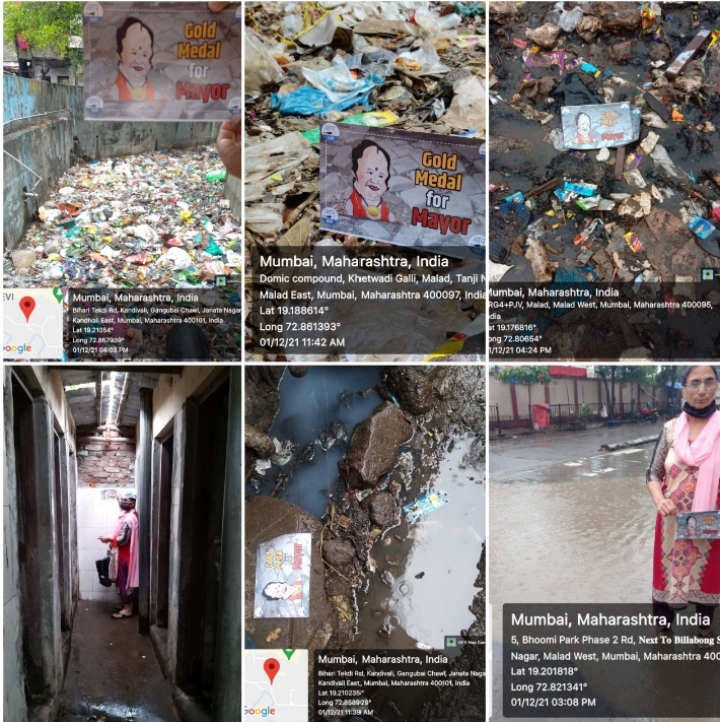 The Aam Aadmi Party today, bestowed gold medals on Mayor Kishori Pednekar, for her phenomenal work as Mumbai’s first citizen – overseeing the destruction of city’s civic infrastructure and making the citizens’ lives more miserable than ever before. As a part of the campaign called #GoldMedalForMayor, AAP Mumbai Ward Presidents placed stickers with the caption ‘Gold Medal for Mayor’ across the suburbs, at locations which demonstrate how successful our Mayor and the Shiv Sena have been – at being incompetent, unaccountable, and unwilling to address the civic issues that plague our city.

The AAP Mumbai campaign, which witnessed over 200 stickers being placed at various locations in North Mumbai, targeted civic issues which adversely affect the quality of our daily lives – countless potholes, excessive pipeline leakages, open manholes & drains, scattered garbage, broken footpaths, dilapidated vehicles on roads, and many more – representing the BMC’s abysmal failure to fulfill its responsibilities as Mumbai’s civic body. The objective of the campaign was to garner public attention to the inability, and as some might argue, the refusal of our Mayor & the Shiv Sena to make Mumbai cleaner, safer and more liveable for the Aam Aadmi.

“Despite being in power in the BMC for the past 30 years, the Shiv Sena has remained incapable of improving Mumbai’s public toilets, road networks, drainage infrastructure, & solid waste management systems; and turned a blind eye towards the provision of essential public services like healthcare and education. In spite of being the richest civic body in India – with an annual budget of over 39,000 Crores, the BMC has silently watched, while Mumbaikars have continued to struggle due to the ineptitude and callousness of our representatives.” said Gopal Jhaveri, AAP Mumbai leader.

“Corruption in the BMC is at an all-time high, and performance is at an all-time low. Kishori Pednekar deserves a gold medal for being the worst performing Mayor of Mumbai by far. It is our appeal that Mumbaikars choose their elected representatives, keeping in mind the incompetence and apathy that we have all been witness to, for the past 30 years.” said Preeti Sharma Menon, AAP National Executive Member & Mumbai Prabhari.