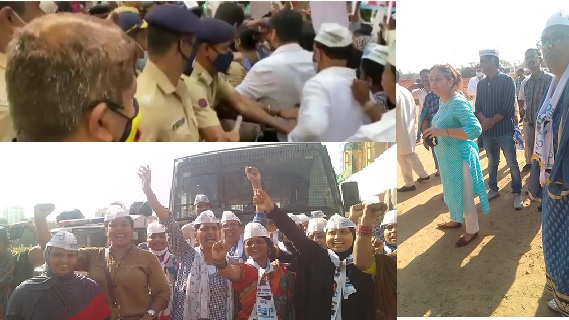 The Aam Aadmi Party today ‘gheraoed’ the BJP Maharashtra Office at Nariman Point, South Bombay, to protest against the BJP’s misrule – be it the naked corruption by LoP Pravin Darekar in the Mumbai Bank scam, or the shameless thuggery in the attack on the Chief Minister’s residence in Delhi by BJP goons. The Police violently cracked down on the AAP rally, attacking party volunteers, and forcefully detaining the gathering.

The BJP is unnerved by the Aam Aadmi Party’s success in Delhi and Punjab, and today, in full public view, with the Delhi Police being bystanders, BJP goons violently attacked the Delhi CM’s residence. They broke CCTV cameras, smashed security barriers, and vandalized the residence’s gates. The BJP is convinced that it is above the law of the land, and is prepared to take any measures necessary to try and deter the Aam Aadmi Party.

The Party leaders and volunteers, who gathered in front of the BJP Maharashtra office with placards & banners, raised slogans and demanded the immediate resignation of BJP leader Pravin Darekar – the Leader of Opposition in the Maharashtra Legislative Council; for defrauding Mumbaikars by falsely claiming to be a labourer, to contest and win the Mumbai Bank Elections. BJP LoP Pravin Darekar has deceived and stolen from Mumbaikars; he has lost the moral right to continue as LoP, and must face the harshest punishment for his crime.

“The BJP believes that its leaders and supporters can act with no care for the law of the land, and with absolute impunity. The attack on Delhi CM Kejriwal’s residence by BJP goons is shocking, and shows that the BJP is willing to pursue any means necessary to stop the AAP’s growth, but we shall not be deterred. AAP demands that BJP leader Pravin Darekar be arrested; that he immediately resign as the Leader of Opposition of the Maharashtra Legislative Council; and that the Maharashtra Govt. set up a Special Investigative Team to conduct a time-bound investigation of the misappropriation of the Mumbai Bank funds, which has affected thousands of customers.” said Dhananjay Shinde, AAP Maharashtra State Secretary.