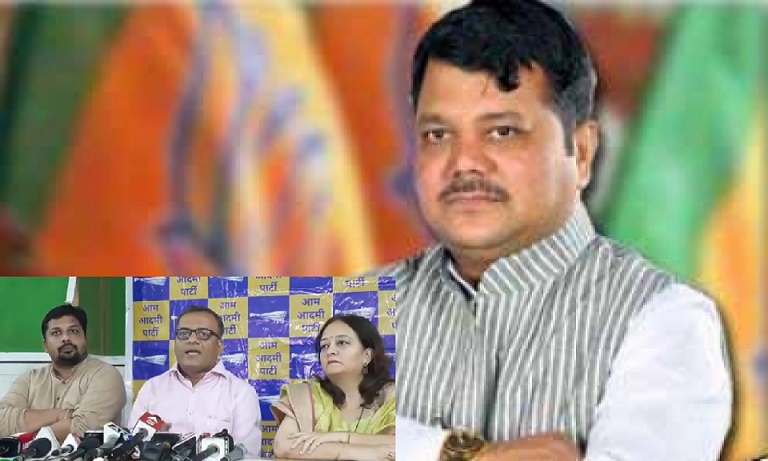 Demands resignation from the office of LoP, calls for SIT
The Aam Aadmi Party today held a press conference wherein the Party leaders called for the immediate resignation of BJP leader Pravin Darekar – The Leader of Opposition in the Maharashtra Legislative Council, for blatantly cheating Mumbaikars by falsely claiming to be a manual labourer to contest & win the Mumbai Cooperative Bank elections; and for overseeing the misappropriation of bank funds to the tune of 2000 crores during his tenure as the Chairman as the Bank.

The Mumbai Bank is a cooperative bank where Mr. Darekar fraudulently claimed to be a ‘manual labourer’, and continued as Chairman for two terms, from 2011 to 2021, prior to which he was a Director for two terms. During this period, as per the the Cooperative department’s and NABARD’s audit reports, there were irregularities related to the misappropriation to the tune of 2000 crores from 2015 to 2021 – with a criminal disregard of regulatory compliances and procedures, as stipulated by the law.

The Aam Aadmi Party, led by Maharashtra State Secretary Shri Dhananjay Shinde, has been at the forefront of exposing Pravin Darekar’s dubious credentials as a manual labourer, which were used by him to register in an organization meant only for manual labourers – the Pratigya Cooperative Labour Organization. Mr. Pravin Darekar was disqualified as a labourer by the Maharashtra State Co-operative Department on 3rd January 2022. It was on the basis of a complaint filed by Dhananjay Shinde on 8th January 2022 at the MRA Marg Police Station, that an FIR was lodged against Pravin Darekar, on 15th March 2022 – under sections 120B, 199, 406, 417, 420, 465 and 468.

“The Leader of Opposition is an office of the highest honour, and we cannot allow a dishonest, corrupt leader like Darekar to hold the said office. The former BJP CM Devendra Fadnavis, and Cooperative Ministers Subhash Deshmukh and Chandrakant Patil shielded Pravin Darekar, and hence, are equally liable for the crimes committed by him. The MVA Govt has also failed to take action against the LoP, because their leaders were acting as Directors of the Mumbai Bank at the time.” said Dhananjay Shinde, AAP Maharashtra State Secretary.

“AAP demands that BJP leader Pravin Darekar immediately tender his resignation as the Leader of Opposition of the Maharashtra Legislative Council, and that the Maharashtra Govt. set up a Special Investigative Team to conduct a time-bound investigation of the misappropriation of the Mumbai Bank funds, which has affected thousands of customers. We also demand that an administrator be appointed by the RBI to govern and monitor the Bank’s functions till this issue is taken to its logical conclusion.” said Preeti Sharma Menon, AAP National Executive Member and Mumbai Prabhari.