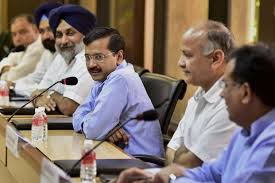 Posted By: govind ghimirePosted date: May 25, 2015in: NewsNo Comments

Delhi chief minister Arvind Kejriwal and his ministers will hold a public meeting here on Monday to mark 100 days of the AAP government amid a row with the central government over a notification giving Lt. Governor Najeeb Jung all powers over transfers and posting of officials.

At a meeting of its legislators on Sunday, the Aam Aadmi Party described the home ministry notification of Thursday as “unconstitutional”, and the government has decided to call a special assembly session May 26-27 to discuss the central order.

AAP leader and former minister Saurabh Bhardwaj told mediapersons after the meeting that the central government was “shadow-boxing”.

“The notification that the central government has brought is not only unconstitutional, but it is against the basic principles of democracy,” he said.

The meeting was attended by Kejriwal and his deputy Manish Sisodia.

Added another AAP legislator Alka Lamba: “If the chief minister doesn’t have a right to appoint and suspend officials, then how is an elected government of Delhi supposed to fight corrupt officials?”

“After discussion (in the assembly), if needed, we will go to the court,” she said.

An official said the public meeting at central park in Connaught Place on Monday will highlight achievements of the AAP government.

“The anti-corruption helpline is in place to check corruption. Party MLAs are reaching out to the people and solving their problems. We will tell the people about the work the government is doing,” he said.

AAP on Sunday also listed its achievements in a series of tweets — about the continuous supply of power despite acute summer, steps taken to fight pollution, opening of a water treatment plant at Dwarka and a move to issue stamp vendor licences online.

Read | Kejriwal vs Jung: Sisodia hits out at Centre on statehood issue

It said that in a bid to control price rise, the Delhi government plans to procure 10,000 tonnes of potatoes and onions through government agency NAFED.

It said it had provided relief to traders by allowing carry forward of refund of VAT and extending the date of filing R9 Form — a long-standing demand of the city’s trading community.

The government also said frequent checks were made on government hospitals, transport buses and bus stations in a bid to ensure that users got the services they deserved.

AAP leaders, who have accused Narendra Modi government of trying to run the Delhi government through proxy, continued to attack the central government over the notification and said the issue could come up in the public meeting on Monday.

Deputy chief minister Sisodia told NDTV in an interview on Sunday that the central government was trying to bulldoze the agenda of the Delhi government and was “allergic to Kejriwal”.

He said the issues concerning the notification will “be resolved now” in the assembly.

Sisodia also took on the media saying the AAP government had been wrongly targeted on many counts.

“Criticism is fine but agenda-driven journalism is wrong,” he said. “Question us, criticise us, hang us if we are corrupt or wrong but don’t spread false rumours,” he said.

The “clarificatory” home ministry notification on Thursday came after days of intense wrangling between the Kejriwal government and L-G Jung over transfer and posting of senior officials.

It also took away powers of the anti-Corruption Branch (ACB) to prosecute “officers, employees and functionaries” of the central government.