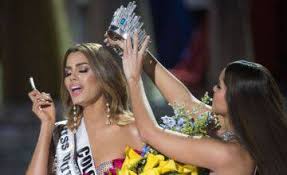 Bogota: Colombian media and social networks lit up with reactions to the botched Miss Universe finale on Sunday night, which saw the national contestant crowned and dethroned in a matter of minutes. The pageant host, US comedian Steve Harvey, announced that Miss Colombia Adriana Gutierrez won the coveted crown but moments later corrected his mistake, giving the title to Miss Philippines, Xinhua reported. Colombians went from ecstatic to disappointed emotions in the blink of an eye, as Harvey tried to set things right. “Adriana Gutierrez was Miss Universe for four and a half minutes,” Colombia’s Caracol news network headlined a story about the bungle on the front page of its website. Adding insult to injury, in one of Harvey’s many online apologies, he misspelled the name of the country. “Steve Harvey, the one who made the Miss Universe mistake, called the country ‘Columbia’,” another article pointed out. Colombian President Juan Manuel Santos had immediately celebrated the win via Twitter, posting “Colombian women are the most beautiful in the world! Congratulations Miss Universe 2015 Adriana Gutierrez! Our pride!” But he corrected with flair, later posting “Adriana Gutierrez, you are still our Miss Universe! We feel very proud!”