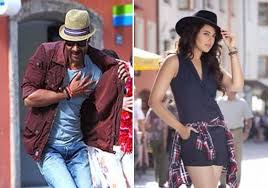 Xavier is a Don who operates from Bangkok. He is bald, has one false eye and controls his empire with help from the cops and administration. He has a ‘killer’ team who wear orange suits. If they cannot kill, they get killed; rather kicked out from the topmost floor of a tower by his sister Marina.

Now Marina has taken a fancy for AJ, Xavier’s right hand man, who rescues her from a dozen goons. She wants him, he does not want her. She vows to get him. Xavier, her brother, decides he will help her get him, even though he is married.

That’s the Bangkok part of the story, which we are told after the interval. Before that we are dealing with Vishy, a crook with a good heart. Khushi takes a fancy for him after she sees him in his underpants in the change room of a mall. Later, she bumps into him in a public latrine at a petrol pump. After both these instances she gets lucky. She now believes he is her lucky charm and starts following him. Soon she is in love with him and he with her.

Suddenly, Xavier receives a message that AJ is in Mumbai. He speaks with the local cops and tries to kill him. The cops run after Vishy. Vishy runs into a hospital, and AJ is captured. Both AJ and Vishy are perplexed at the turn of events, so are we. But, to be honest, by then, we have no option but to sit and watch the vengeance being wreaked on the screen without any reason. Suddenly you have Vishy dancing with Khushi and AJ doing the same with his wife.

Wait, I forgot to mention the best scene here. AJ’s wife is seriously injured. She is pregnant; he flies her to India and after five surgeries in five months, the last one being that of the spine, she delivers a baby boy!

Sorry to be going back to the taklya, Xavier (Anand Raj). Just being bald, with one false eye and a silly grin does not mean you are as menacing as Shetty, the yesteryear villain. This Xavier can be best described as a moron who does not even remember his sister’s name when she is going up in flames. He keeps hyper-ventilating ”Maria, Maria.” And speaking of Marina (Manasvi Mamgai), she tries too hard to be sexy and vicious, ending up as a mannequin.

Khushi (Sonakshi Sinha) is still in her Chinta ta chita chita mode. She needs to do more with her talent. Yami Gautam on the other hand is just a caricature. In one scene, when she is being chased by Xavier’s goons, she telephones AJ and tells him. He asks her, ”Kaise dikhte hai?” she replies, ”Saab ne orange suit pehna hai!” She survives massive hammering, even after recovering! Made of steel this girl!

Kunaal Roy Kapoor is made a buffoon of. He is either farting, eating or mouthing silly lines.

As for Ajay Devgn, he goes through this mindless script and direction with the conviction of a committed player. He dances, fights, emotes and jokes around with style, never once giving you the impression that he is part of this nonsensical farce. He is in a zone of his own. His fans are in for a crazy time. They will have AJ and Vishy to choose from!

To hell with commitment or appointment; this one is pure punishment.